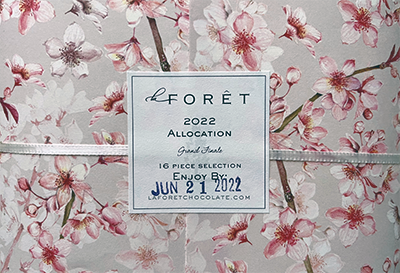 The end of an era is not always so evident as when Wendy Sherwood announced this May that she was closing La Forêt and the current allocation would be the last. La Forêt has made 4 allocations — limited edition sets of bonbons — a year since 2010. They were special events and earned a loyal following, but the June 2022 set would be the Grand Finale.

The closing also meant no more shop in Napa or online where year round you could buy La Forêt’s French style chocolate bars, caramels, orangettes, turtles, honeycomb, and other confections that used Wendy’s unique house made couverture. La Forêt was also unique in that you could only buy their bonbons in the allocations; they were not available year round like their other chocolates. Wendy did this so there would never be any issue with less-than-fresh bonbons.

We have gotten a few allocations since we first discovered La Forêt on a trip to Wine Country. If I had known the end was coming so soon, I might have tried to get every allocation available; they were that good and special. There was no question that I was signing up for this last hurrah.

Since there will be no more La Forêt 😢, this article is basically a witness to history and written in the hopes of maybe inspiring other local chocolatiers to make their own couvertures (Wendy made hers blending Valrhona and Guittard chocolates) and keep doing great, creative chocolate in SFBA.

The allocation was entitled “The Grand Finale!” There were 10 flavors in the collection, featuring some greatest hits, a variation on a theme, and a lot of new ideas. The pieces were all well made and visually interesting — especially the one with the little churro on top.

The repeats were low-key, but distinct experiences: A cream ganache, a single origin, and a fruit & nut combo.

Devonshire Cream was a clotted cream ganache in a 70% Guanaja (Honduran) dark chocolate shell. Like all La Forêt molded bonbons, it had a super shiny shell. Inside the dark shell, the smooth, cream colored ganache tasted like cream.

Confession: I’ve never had real clotted cream, so I can’t compare the taste, but this was a milky/creamy tasting ganache — not a milk chocolate taste. It was distinct and contrasted nicely with the taste of the thin dark chocolate shell.

The Tanzania Truffle was a regular in the allocations. Introduced in 2018, it was a single origin 70% ganache in a dark shell that La Forêt roasted and refined beans from the Kokoa Kamili Fermentary in Tanzania. So in addition to making her own couverture (which I haven’t heard of any other SFBA chocolatier doing), Wendy also made her own bean to bar chocolate.

I’ve had it several times, and I can understand why Wendy considered it worth the trouble. It had a good chocolatey smell, which heightened anticipation, and then the taste was strongly fermented with berry/cherry notes and little hits of bitterness as it melted. I hope someone else picks up these beans and continues to make single origin chocolate from them. It has an extra chocolatey taste plus distinct notes of fermentation and berries, so it’s a superb example of why single origin chocolate can be special.

The Whiskey Caramel Bourbon was similar to a piece in the Spring 2021 allocation: the house salted caramel flavored with bourbon and layered on dark chocolate ganache in a dark chocolate shell, just a different bourbon. This time it was Michter’s Small Batch Bourbon from Kentucky.

The bourbon was added to the soft salted caramel that sat on top of a thin layer of dark ganache inside the shiny thin shell. It tasted like a shot of bourbon in caramel with a little boozy bite before I even tasted the dark chocolate. A bourbon chocolate flavor lingered. It was simply yummy.

Maybe even more than the familiars, I will miss the excitement of experiencing new pieces in the allotments. Since La Forêt did not keep bonbons in stock, allotments were the only way to experience them. And a lot of pieces were one time only. Like a miniature version of an amazing dessert at a fabulous restaurant you visited once on vacation, they remain vivid, happy memories.

The Churros Con Chocolate had to be the cutest one with its mini “churro” pressed into the top of the shiny dark chocolate shell. Inside the dark shell was a caramelized cinnamon ganache on top of a dark chocolate ganache.

Cinnamon was the first and most dominant flavor, then chocolate. It ended creamy/milky and cinnamony. The flavors were a good interpretation of dipping churros in hot chocolate. The only thing missing was the churro texture. The ganaches were smooth, and look at that beautifully thin shell in the cross section!

I hadn’t heard of Minnesota 7 layer bars before, but according to the menu card, they are a dessert from Wendy’s home state. The La Forêt bonbon version was several chocolatey layers poured into a gold foil cup.

The golden top had coconut and crunchy bits (graham crackers?), the dark middle had chopped nuts and honeycomb (I think), and the milk chocolate bottom seemed to be smooth thick chocolate. The menu card listed graham cracker, candied almonds, honeycomb, dark chocolate, and toasted coconut, and it seemed like the range was from most crunchy in the top layer through semi crunchy to smooth on the bottom. I loved the overall crunchiness of the piece from the graham crackers, almonds, and honeycomb, and the ending was chewy coconut. Chocolate and graham cracker flavors dominated, then coconut. A fun piece.

The UN Café SVP was a pretty, shiny, rounded top pyramid decorated with gold leaf. Inside the 70% shell was a dark espresso ganache and chocolate covered coffee bean. The piece had an immediate espresso flavor, then the crunchy coffee bean added a burst of more coffee flavor. So good: Chocolatey chocolate with a distinct coffee flavor.

Oeufs de Mouette was appropriately egg shaped. The speckled milk chocolate egg was filled with hazelnut praline made with crispy crépe dentelle (similar to or the same as feuilletine). The small bits of crépe dentelle made for an extra crunchy praline. It had a good hazelnut flavor and wasn’t overly sweet despite being milk chocolate in and out.

Another milk chocolate piece was the square Milk and Cookies. Described as chocolate chip cookie dough and white chocolate ganache enrobed in milk chocolate with golden chocolate sprinkles, the white ganache was layered on top of a brown speckled filling that was the supposed “cookie dough” — but psych! —it was marzipan. Even if you tell me it wasn’t, it tasted like marzipan and had that dense marzipan texture. I am not a fan of marzipan, so not my fav piece in the allotment. But it was a well made, pretty piece, and if you like marzipan you would probably have liked it: The marzipan flavor lingered the longest.

Lucky for me the last piece in the allotment blotted out the marzipan on my tastebuds. The Pisco Sour Con Cédron was a white chocolate piece with lemon verbena and lime flavoring the light yellow ganache inside a Valrhona Ivoire shell (the good white chocolate). It looked like the ganache was topped with marshmallow froth. It smelled citrusy and tasted so citrusy. Yum!

The marshmallow foam was a fun texture that melted quickly. This piece was sweeter than the others, but the tart lime countered the sweetness nicely. And again, just look at that perfectly thin shell in the cross section — sigh, Wendy will be missed.

Wendy hasn’t announced what she plans to do next. She has suggested that if you are interested, follow her blog, Are We In France Yet?, to keep up on her adventures. With a background as a pastry chef and a strong connection to France, I hope the future includes her delicious, inventive chocolate in some accessible form.