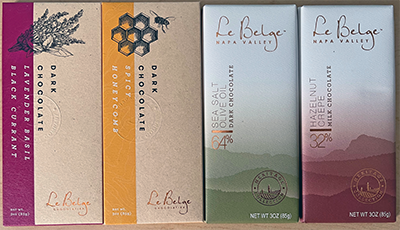 A mix of bars produced a mix of reactions

We previously tried bars Le Belge makes under a local grocery store’s label. We enjoyed them and considered them a good value, so we were excited to try bars they were selling under their own name.

Le Belge has several lines of bars with their own label: Grand Cru, their high-end line; Signature, their basic chocolate line; Heritage, their locally sourced infusions & inclusions line; and Bijou, their fancier inclusions line (they remind me of Charles Chocolates’ bars). They also make plain and salted chocolate tasting squares.

The Heritage Bars Star Grocery carried were a hazelnut milk chocolate and a sea salt dark chocolate, so a crowd pleaser and a more adult option. The Heritage Collection packaging is attractive with copper metallic text printed over top of a single color watercolor-esque illustration of misty hills, evoking the Napa Valley countryside.

I was surprised thinking French style chocolates are usually less sweet. I shared it with friends, and it was very popular with the old-school milk chocolate lovers in the group. The flavor balance between hazelnut and milk chocolate got one of them reminiscing about Nutella sandwiches. I don’t have that reference point, but it meant they strongly approved of this bar.

The other Heritage Collection bar we tried, the Sea Salt Olive Oil Dark Chocolate, is a 64% dark chocolate bar flavored with extra virgin olive oil and Himalayan pink sea salt. It had a hard snap and was slightly bitter. I didn’t experience the slippery sensation I usually get from olive oil chocolate and it wasn’t as salty as I expected a sea salt bar to be either. The flavors were too subtle for me, and the chocolate was not very tasty. The other tasters were all in basic agreement with me.

There are 3 other bars in the Heritage Collection: Cherry Almond 54%, Honey Ginger 64%, and a Raspberry Rose White Chocolate. They sound interesting, and maybe the inclusions work better in those than the Sea Salt Olive Oil bar.

The Grand Cru line also uses local ingredients in Belgian chocolate, but the chocolate used is of a noticeably higher quality. I definitely recommend this line, both for the quality of the chocolate and the interesting flavor combinations.

The packaging is attractive too with graphics representing the ingredients printed over a 2-tone background. While the Heritage Collection wrappers look more classic, these look more contemporary. These wrappers are also embossed with a circular Le Belge seal, which added a nice textural touch along with the cardboard’s visible grain.

The Grand Cru Dark Chocolate Lavender Basil Black Currant 64% was a well made bar with a good snap. It smelled like basil. It was not too sweet and had a good chocolate flavor. While initially it had an herby taste, the black currant flavor developed as it melted to be the dominant flavor. The lavender was a small note, which I preferred (a little lavender goes a long way). It had a small crunchy texture from the crystallized herb which was interesting. This is a good bar.

The Grand Cru Dark Chocolate Spicy Honeycomb 54% was interesting too. It had a little crunchy sugar texture to approximate honeycomb. It was a good dark chocolate, not bitter. The spicy warmth took a while to appear, then built to heat and lingered.

Everyone who sampled the spicy honeycomb bar liked it, while they were mixed about the lavender basil black currant bar. Some people didn’t like the savory basil taste; and some others didn’t like the tart berry flavor in a dark chocolate. But others liked the unusual combination and how the flavor changed as it melted. And some thought the crunchy crystallized basil was pretty cool.

I liked both bars and recommend them both. The Spicy Honeycomb is the safer of the 2 bars to try. It’s more interesting than a simply spicy chocolate, but not too out there. If you like savory options and unusual inclusion combinations, try the Lavender Basil Black Currant too.

There are 3 more bars in the Grand Cru Collection: a plain milk, a milk with almonds and fennel, and a dark with raspberry and hibiscus. I think I might try to complete this set and maybe try some of their other lines to get a better feel for their chocolate.

Le Belge doesn’t have a storefront, but you can order their entire line of chocolate online. As far as I can tell, that is the only way to get their truffles, which include several collections, such as traditional European flavors and a set of current, more trendy flavors.

Le Belge also makes chocolate for other businesses, such as hotels and stores, that are branded for those businesses. The house brand bars we tried before are made by Le Belge for Oliver’s Market and includes a wide range of unique flavors not available on the Le Belge site. Those are available in store only, not online, so your best best for trying Le Belge chocolate is either the Le Belge website or a trip to wine country.