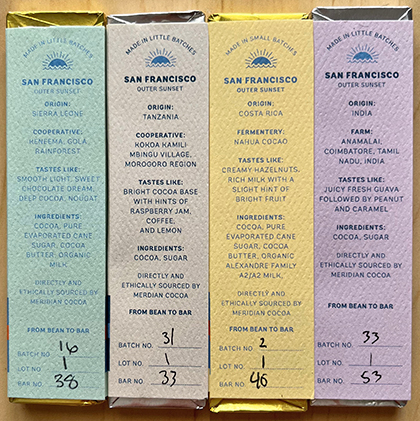 A refined chocolate experience you won’t have to refrain from

There’s a micro bean-to-bar maker in SF that is micro both in business size and bar size. I don’t think I’ve seen smaller bars before, so I was intrigued. They are pricey though, so let’s address that first.

I am always willing to pay more for craft chocolate, but the bars I bought were $5 each and they’re only 20 grams (0.7 oz.). For comparison, a standard Hershey’s bar is 44 grams (1.55 oz) and costs between $1–$2. And while there is a big price range for single origin craft chocolate, you can find lots of excellent 80–100 gram bars in the $10 range. So, pricey is accurate. Are they worth it?

I bought the gift box version from Little Burde Chocolate’s website. Four bars for $20. The graphics on the packaging were very cheery and eye catching. The box itself looked like it would hold a small bottle of moisturizer. Instead there were 4 little chocolate bars inside. The 2 milks were wrapped in gold foil, the 2 darks were wrapped in silver, and they were all in different color paper sleeves with the same graphics as the box.

The sleeves identified each bar’s origin in a band at the bottom. The back of each bar included more info about the beans’ origin, the bar’s flavor profile, and handwritten notes of the bar’s batch number, lot number, and individual bar number. It was clear from the get-go that a lot of thought and care went into these bars.

The bars themselves were attractive too. Divided into 4 squares, each square was a different pattern. All of the bars were well made with a good snap and smooth texture. Definitely gift-able.

The 4 bars I got were distinctly different from each other. The first bar I tried, the Dark Milk Costa Rica, Guatuso 58%, was very aromatic. When Cacaopod opened the foil wrapper, I could smell it across the table.

It had a medium snap, and the first thing I noticed was that it was not a sweet milk; it was actually bitter for a 58% cacao. The tasting notes described it as hazelnut, rich milk, and bright fruit. I found it mostly nutty and a little fruity once it started melting. Unlike my experience with most tasting notes, I actually got the experience described — mostly. I also picked up a slightly vegetal taste not in the notes and I couldn’t place it either. In any case the Costa Rica bar had a unique, distinct flavor that lasted a long time. I liked it.

The Dark Milk Gola Rainforest, Sierra Leone 58% was a different experience altogether. For starters, the bar was redder than the Costa Rica bar. It wasn’t as aromatic but it smelled more traditionally chocolatey. It had a softer snap and melted quicker.

The tasting notes described a light, sweet chocolate dream with deep cocoa and nougat, but I didn’t get that at all. It had an overtone that was almost soapy or flowery with hints of sweet almond extract. It seemed almost chemical and made me wonder if something happened in the fermentation process. It wasn’t bad, but I think it’s best for more adventurous chocolate eaters. Definitely a unique experience.

The Anamalai, India 72% was a normal dark chocolate color and smelled peppery/spicy. It was immediately bitter but got better as it melted. It was also less bitter when I finished it a couple weeks later. It had definitely mellowed.

The flavor was herbal first (in keeping with the peppery smell), then tropical fruit and a little berry. The tasting notes mention guava, peanut, and caramel, but I only got the guava reference. It ended with a drying sensation but a nice aftertaste. An interesting experience.

The fourth bar, the Morogoro, Tanzania 71%, used beans from the Kokoa Kamili fermentary, which I like based on my experiences with La Forêt’s single origin bonbons. So I saved this bar for last.

The bar had a good snap and chocolatey smell. It was very fermented tasting and not as bitter as the Anamalai bar. Overall, it was very bright tasting with a sharpness that I can’t quite describe. Green? As it melted it got a little salty. A green salty spice flavor? It had some fruitiness too like the tasting notes described: a berry overtone that segued into citrusy. It was the best bar of the batch.

Little Burde Chocolates makes single origin bars using ethically sourced beans. The bars I tried were made using the beans they are currently working with, but the origins change sometimes, so there will be something new to try in the future. You can sign up on their site for their emails to stay informed (although they say on the sign-up that they don’t guarantee any news).

You can find single Burde bars at some spots around SF (check their website). They could make for a nice little indulgence to enjoy with a cup of coffee. I also think the gift pack makes for a good after-dinner chocolate tasting with 2–4 people. The bars are very different from each other, and the little squares in each bar are a nice tasting size.

Bonus: If you try the bars and like them, you can buy in bulk and get a significant discount: 25 bars for $80. You can either get 25 bars of a single origin or an assortment of all of the current bars they make. If you think 25 bars sounds like a lot of chocolate consider that the bars are so small — less than an ounce —  you could eat a whole bar a day and be finished before the end of the month.