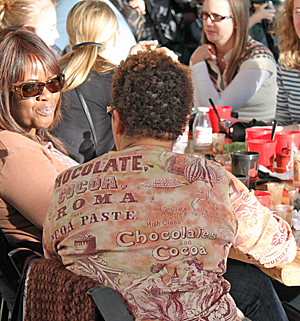 Is mixing beer with chocolate a good thing or a recipe for disaster?

As a non-beer-drinker, I went to the Craneway Local Chocolate and Craft Beer Festival (2/6/2010, Richmond, CA) for local chocolate. The event left me somewhat disappointed — not enough chocolate, no food or non-alcoholic beverages (no palate cleansers or things to slow the alcohol), and nothing on the program about chocolate/local chocolate/pairing chocolate with beer/something educational/entertaining related to the event’s theme.
But it did introduce me to an awesome place for events (the Craneway) and a revelation about beer & chocolate.

The Craneway is a former Ford plant built in the ’30s recently converted into a great “blank space” for events. It’s right on the water with beautiful views of the Bay, which you can see through its giant walls of windows or from the outside perimeter. It’s got secure parking and a restaurant, plus it’s at the end of the bike trail from Point Isabel, so you can cycle over during the day. It’s a rather eclectic showcase — in addition to the festival, they’ve also had a Merce Cunningham Dance Event that moved through the entire space (which is like 2 football fields in length or something equally huge) and the audience followed them around (no seating!). Coming up is a Bay Area Derby Girls roller derby event, at which I assume they’ll do something to separate the audience from the event.

It’s a little off the beaten path and if you drive, there’s a guard who wants to know why you’re visiting — so it’s like an exclusive club — one that serves beer & chocolate and puts on local roller derby shows and national dance events. Don’t you love the East Bay?

But back to the festival, which as I said, was short on the chocolate: Only 5 chocolate exhibitors, and 2 of them were chocolate dessert purveyors, not chocolatiers. Still kudos to the 5: Bitterweet Cafe, TCHO, Vice Chocolates, teeny cake, and Galaxy Desserts.

As I said in the beginning, I don’t drink beer — no other reason than I don’t like the taste, so I was not enthused about trying beer-themed chocolate. But when one of your site-recommended chocolatiers (Vice’s I-Li Brice) has developed a special beer-infused truffle for the event, you do not say no when she hands you one.

The Black Lager Truffle is certainly lovely to look at: dark chocolate decorated with 2 round rice crisps (like Rice Krispies, but smaller and made from organic brown rice) and a dusting of sea salt. It was the inner ganache flavor that gave me pause, but I-Li explained that she chose Lucky Hand Black Lager for its chocolate taste.

So trusting the expert, I tried it — and really liked it. It doesn’t have a beer taste (or maybe more importantly, an aftertaste) at all. Instead the lager adds a memorable depth to the dark chocolate ganache. I hope she keeps this truffle on her menu. I’m not about to start drinking black lager, but I’d eat these again happily.

Vice Chocolates is going to be at the 2010 San Francisco Chocolate Salon (3/20, Fort Mason, SF). If you plan to attend, be sure to seek them out and try their recommendations. I predict it will be worth your while.