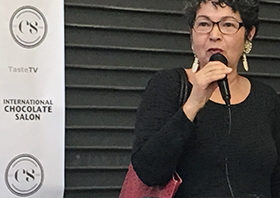 On a stay in France in the early 1970s, Alice was given some handmade French truffles by her landlady for her birthday. Less sweet than the chocolates Americans were used to, Alice described the intense chocolate taste as “like eating luxury.”

A year later, in her home kitchen in Berkeley, Alice tried her hand at making her own truffles from her landlady’s recipe. The results were larger and lumpier than the French truffles, but they were a delicious. She began selling them through a Berkeley charcuterie (across the street from the now legendary Chez Panisse), and they were so popular, she was delivering orders of around 300 truffles a day within the first week.

Alice’s versions of the luxurious confections came to be known as California Truffles, and with them, she is said to have introduced French style chocolate truffles to America.

She opened her first Cocolat chocolate and dessert shop in 1976, and by the time she left the business in 1989, there were 7 locations in the Bay Area. (More info in this 1988 NYT article.)

These days, Alice is still an industry influencer, as an award-winning author of cookbooks about chocolate & desserts and through her teaching, speaking and workshops.

She also has an impressive collection of 40–50 vintage chocolate-themed posters, which she occasionally allows to be exhibited.